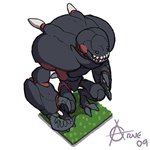 How we could implement manual kneeling