Had a terror mission in 31 october, in November 5 I have another one 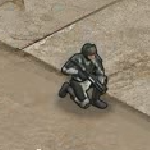