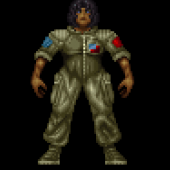 [V1.2 - Ground Combat] Softlock after killing all the active aliens during their turn.